I am very lucky to meet such nice dog friends.  We love to play together and  some friends come with us on fun outings and walks.

When I was a young pup meeting new friends (my human had a wobbly camera in then!)

Since then, I have met many more and video skills have improved!

Aïda  is a big girl with lots of hair!  She loves swimming and rolling around on the beach.

A droolie softie and a good sport who loves her playtime.  She doesn’t mind me practising my jumping skills over her!  The expression ‘keeping a lion at bay’ came from the Ridgebacks being able to keep a lion in the same place by jumping around them.  I practise my ancestors’ skill on Aida!

How long can I keep Aida in lie down position:

She enjoys running after me with a stick…which is great since I love a good chase! 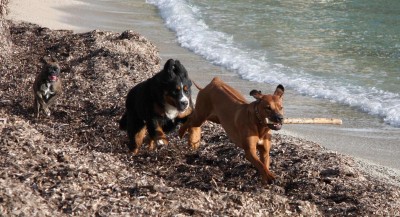 Baba is a year younger than me and doesn’t live too far away.  Baba bubbles with energy and is quite the super hero.

The first time I met him though, he was just a puppy punk and I wasn’t in the mood so I ignored him….oops! He’s bigger than me now….gulp! 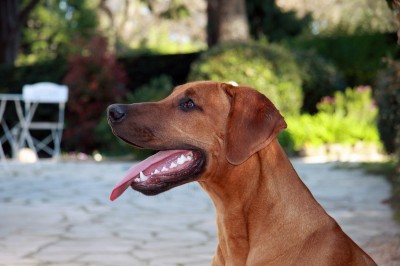 Bailey lives in beautiful Norfolk, England.  He is a very lucky, happy chappy who enjoys roaming around on his land.  I have never seen a doggie’s tail wag as fast as Bailey’s..he might beable to fly with it soon.

Although Bailey is two years older than me, you couldn’t tell since he has a playful puppy nature full of cheeky mischief.

Baloo is a very clever dog friend.  He is clicker trained and can do so many things.  He is two years older and has a great influence on me and he loves a good play. 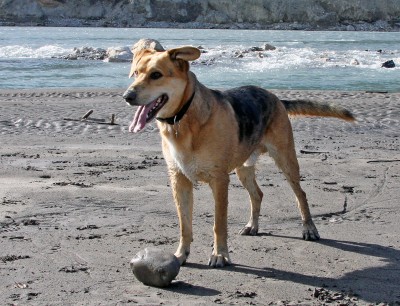 He is very cool and collected and can run fast.  I do my clicker training with Baloo and he helps me with my practise drills.

Before and during our clicker session we take short breaks together to relax, drink and play: 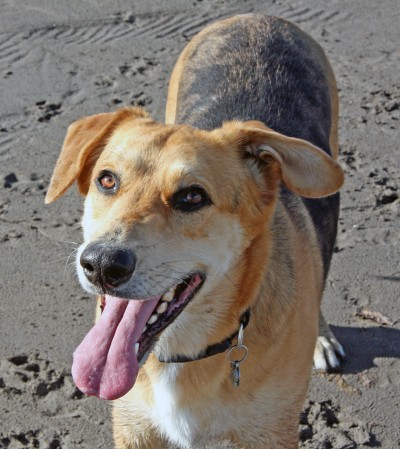 Beaudor is a Ridgeback boy who loves life in Holland.  I met super Beaudor through my blog.  He is my Dutch blog friend who comes on holiday to France often.

Our humans like to meet up which means a special day of super walks and play time for all of us.

Beaudor is a happy, bouncy big boy who loves his humans.  I think he likes me a lot since he sometimes goes a bit shy when I am around and he just wants to stand and watch me walk by…heehee 🙂 :

Bimbo’s human is always throwing the ball for Bimbo to fetch but if she thinks another dog is going to get the ball first, she doesn’t bother since Bimbo is too cool to compete.

She’s quiet and minds her own business but every so often she lets the other dogs know she is by far the fastest runner…wow!

Bimbo now lives with another whippet, his name is Paterfix…He’s a cute guy who likes his independence but he plays with me sometimes.  I kinda like him!

These cool little guys all live together.

Sometimes we hang out together in the lounge or go sniffing together in the garden,  We mainly meet up when our humans play the parlour games for dogs.  (Click here to see my blog post on these evenings.)  So we always have a good time together with great treats and nice snoozes. 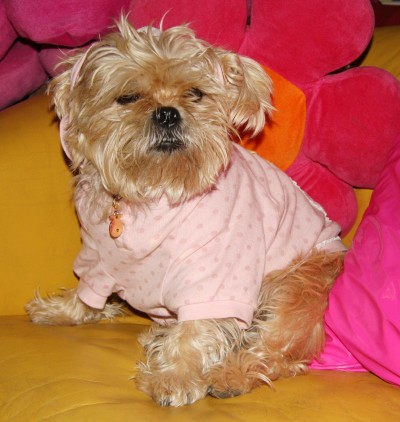 I first met pretty Cleo on the beach when we were much smaller and her human let her off the lead for the first time to play with me – she jumps all over the place but she is so light I don’t notice.

She’s great for running and playing in the water.  She has curly fluffy hair that looks very funny when she comes out of the water.  Birthday: 7th July 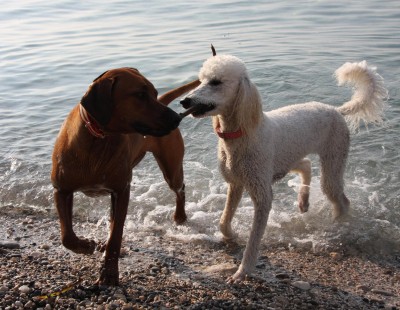 Our favourite games to play together normally involve seaweed and sticks:

Stunt girl Ezey never stops running.  She loves everyone and everything and most importanty likes to play, play; play.  She’s a water and ball loving dog to the max.  She is just over a year younger than me and sometimes I just have to flatten her when we first meet since she loves to jump on me…grrrr! 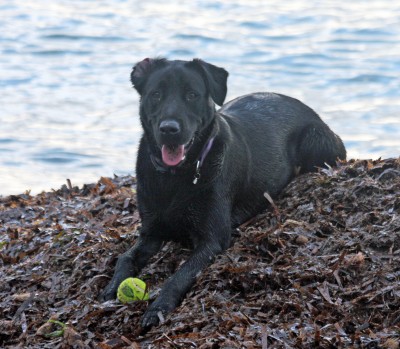 She has two human pups living with her who are equally full of energy playing with her…yikes!

Happy shaggy George ambles around on the beach, randomly changing direction and looking up every so often with a mop of hair covering his eyes.

George is a funny, cheeky chap who normally makes his appearance on the beach at the weekend.  He always come up and says hello to me very nicely when he arrives.  We met when I was puppy during my first few play times on the beach, so I will always go out of my way to say hello to him.

He’s quite sporty and will have a bit of a run and play with me but prefers the calmer ‘sniff while you jog’ sunday morning pace.  Birthday: 30th march

Ginger is a tiny bundle of firecrackers.  When I say hello I have to be very polite and gentle with her even though she tries to thump me on the nose.  At times the small dogs bark at me using lots of rude words that only us dogs understand but Vikki still expects me to be polite and not react to them…humpf! She thinks the bigger dog should always turn the other cheek! 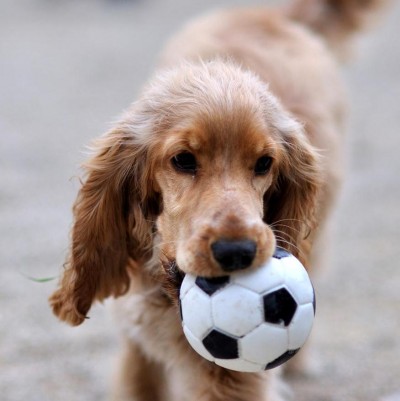 Kali is a Ridgeback boy who lives in Scotland.  He is a year older than me and he is very strong and athletic…and he’s the same colour as me!  We get on very well and I think he likes me ♥….I think he is very handsome too ♥

He is very outgoing and playful, so we match when it comes to good old-fashioned Ridgeback runarounds.

He also has an unusual passion for chasing pine cones…I can understand chasing sausages…but pine cones? :

Lily is my wild Ridgie girlfriend.  Its ‘game on’ when Lily and I meet for a playtime.  What fun!  She lives with four other Ridgebacks. Birthday 2nd January. 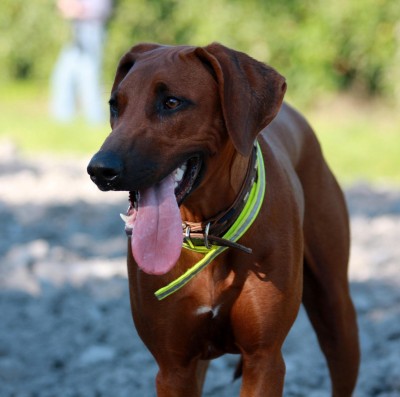 She is great fun and really pretty.  I am very happy when I see her.

Sometimes we also meet at the occasional dog show.

Millie is a natural born sniffer.  When her nose opens and works to follow smells, her ears tend to close.  She is too busy to stop and play since she has a scent to track.

We spend quiet, calm times together learning about our shared hound talents.  We prefer grassy, bushy areas and enjoy sniffing the same things at the same time. 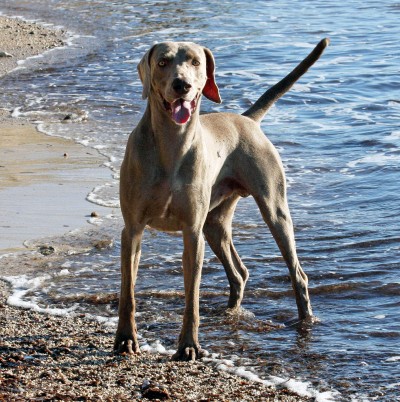 Othello is really happy jogging around with a toy in his mouth although I quietly try to get it without him noticing…requires some skill though!  Then he chases me for it…yipee!

Now I’m big enough,  he lets me run alongside with him.

We’ve both got ‘wash & go’ hair so we can get really sandy and its easy to shake off.

I can be my real tomboy jokester self with him.

A moment with Othello on our paradise beach:

These guys are my fab English friends. Zac is a nutty ball-lover and Otto is a cool stick-collector.

When in England, I meet up with them for a play.  We jump and splash around in a pond on the village green.

Otto & Zac show me what pond play is all about:

Ruby is a curly haired doggie who has a holiday home nearby.  She is a little shy of doggies but doesn’t seem to mind me (probably because I don’t really pay her that much attention other than a quick hello).  She likes her sticks and if it’s just the two of us, we happily walk and sniff the beach together.

One day when we arrived home, Vikki opened the car door to get out and in popped Sunny’s head to say hello!  Her human followed seconds after with a big smile saying that they are our new neighbours in the village…hurrah!

Us hounds aren’t really into running after a ball when we’ve got each other to run after!  She is a great swimmer, agile runner and a very polite girl.

We enjoy each others company which pleases our humans since they really like to chat!

I do some of my training practise with Toffee, so we have to work hard and concentrate but luckily our humans realise that we love playtime.  We also enjoy our outings, adventures and walks together.  Birthday 11th April, he’s 4 days older than me.

Toffee has a great sense of humour and can do brilliant burps.  His lovely human makes exceedlingly nice chicken training treats and sometimes I get a few from her..yum. He can have a moan when he can’t catch me running in circles around him…but he’s a good sport!  We love our wrestling and ear nibbling. 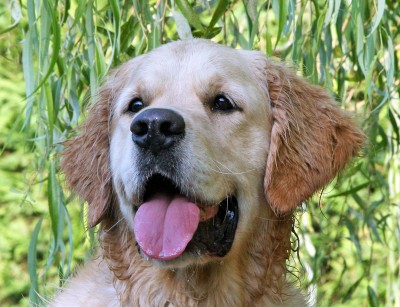 Verlaine is a 6 year old friendly boy and has a face that is always smiling.  He is young at heart and is very nice to me.  We met on a walk and our humans thought it would be a good idea to meet once a week.  You can tell how energetic Verlaine feels by how high his tail is.  By the end of our walk, his tail is always quite low to the ground – tee hee!  Our humans are going to start learning and training us to do canicross together…yikes 🙂 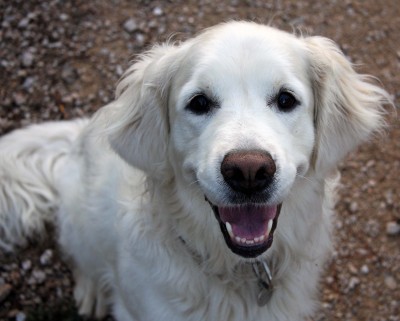 Zed is a little dog with one big cool character.

He loves playing with dogs that are bigger than him.  I am convinced he thinks he is the same size as me.

He is one of those likeable characters that doesn’t say very much, he just hangs out and enjoys himself.  He especially likes to follow me everywhere.

I don’t mind..its quite funny really.