Mama Shona (her proper name is Roka Gaia al Andulus)  lives in Viterbo in North Italy.  She is vey beautiful and a very strong hunter. She was born on the 29th April 2004 in Durban, South Africa.  Her mother was Roka Mbebe and father was Glenaholm Judge of Lionhunt.  Click here to see more about my Ancestors.

Before I left for my new home, it was great for me to be living with her and the other 2 grown up members of the Ridgeback family; Amarula & Saba.  I learnt lots from them and was already very well socialised around big dogs and knew how to show polite manners towards my elders.

Me & my Ridgeback elders

I learnt lots of Ridgeback tricks from them so I will always be grateful.  Although sometimes the big guys forgot how small I was when they were playing..ouch!

Baby-Pup Zola after a tackle from the big guys: 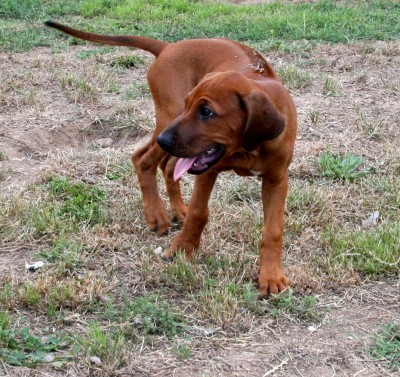 Big Paws behind me can’t reach me now:

Under the chair for peace and quiet with my brother:

My Papa Sion ( Amini-Sion-Mawasili) is a very experienced traveller.  He was born on the 9th September 2004 in the Czech Republic (breeder: L. Jaromir).    He is very handsome and wins lots of shows..you can see his show results here.

When I was very little ( a big Shortie),  I was lucky to spend a lovely summer’s day with him at his home relaxing in the garden whilst Vikki talked with his humans, Paula & Bruno.  Paula said I was a bold little girl, fearless of my big Papa Sion. 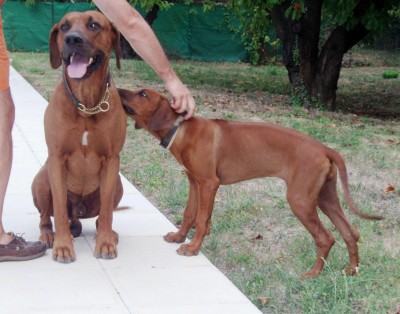 In July 2010 I visited my Papa Sion again, this time I wasn’t such a small pup.  We had a run around together and I watched his amazing ‘sniff & dig’ skills.  His human, Bruno, told Vikki that my Papa is excellent at scenting and tracking in the field and he thinks I have the same talent.