The Shorties, that is to say – the doggies that stand well below my belly in height – are very popular on the French Riviera.

They don’t mind me calling them Shorties, in fact their humans argue that the Shorties are the normal sized doggies around here and it’s me who is the ‘big girl’!

From a very young Zola-puppy age, I have been fortunate enough to meet many Shorties.

Seeing as there is a local majority ruling of Shorties, my human thought it best to have good relations with them.  So, I have an important role representing the minority of honourable big dogs who live in this region and improving ‘breed-relations’ between us big dogs and the Shorties.

Relaxing on the beach with Schnauzer Chad

One thing is for sure though, these Shorties can behave anyway they like!  In fact, they can skip their doggie manners entirely and their humans will still think they are the sweetest doggies…Humpf!

Yep!  Unlike us big dogs, most Shorties possess the ‘Cute Power’!  To have this kind of power is like having an  ‘Access all Areas Dog Pass’ authorising these doggie cardholders to do as they please!

Doggie friends that have the ‘Cute Power’ include: 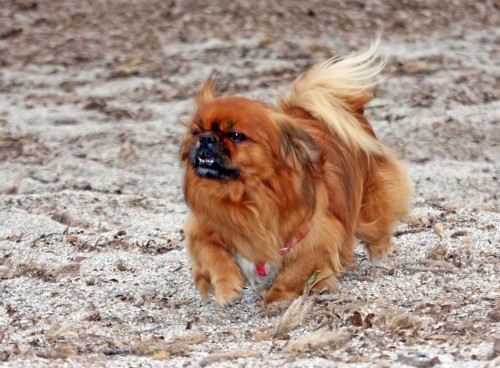 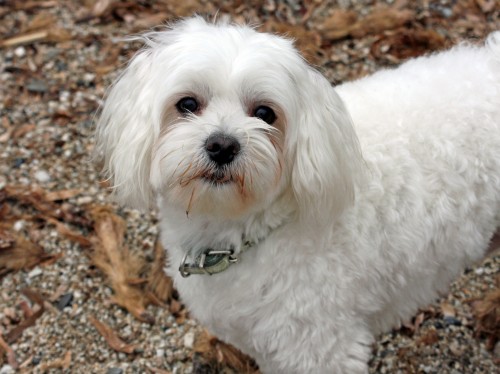 Some examples of what the Shorties can do thanks to their spellbinding ‘Cute Power’:

Shorties are allowed to  jump up at humans, even ones they don’t know.  In response, humans: open their arms to them, make the sounds ‘oooos’ and ‘ahhhhhhs’, tell them how cute they are and praise them for being such a ‘good doggie’ !

Humpf!  I need permission to clamber up my human –  otherwise it’s a real no-no!

When I was younger I was taught at every opportunity not to jump up on my human since the treats and attention always came out if I kept my four paws on the ground.

Shorties are allowed to bark madly at humans, human-pups or random stuff whenever they feel like it and their humans are more likely to stroke and cuddle them than ask them to be quiet…different story for us big dogs…humpf!

‘Cute Power’ allows Shorties to jump up on any sofa whenever they like. 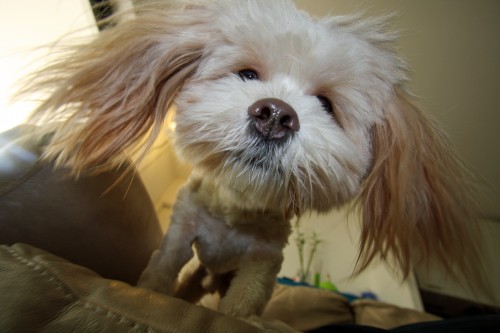 ‘Cute Power’ convinces humans to provide Shorties with their own bespoke armchair to relax in.

Shorties always get the best stick because us big dogs are told to let them have it, even though we found it first! 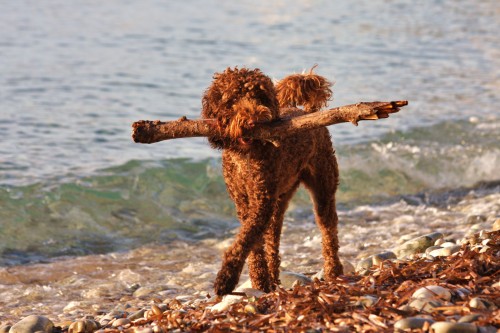 Basically, ‘Cute Power’ enables Shorties to be as cheeky as they like. As far as their humans are concerned, these doggies can do no wrong!

I’m not complaining!  It’s just an observation and I’d probably do the same in their paws if I had such a power. 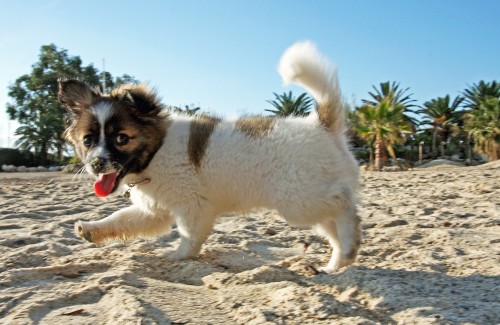 So…I just get on with being the big cool dog!  I love being a big dog and I don’t mind the little guys – I kinda like their style..heehee!

I have learnt that there is definitely a way of behaving around a Shortie which they appreciate and which leads them to think that us big dogs are super cool.

It’s all about not really noticing them and not making a big a deal about them!

Let them feel included but don’t show too much interest.  They are used to having so much lavish attention on them, that they find an indifferent big dog very interesting! 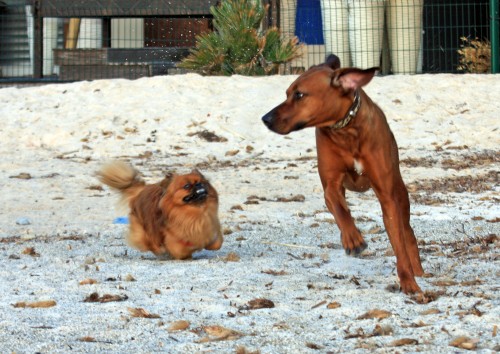 As a big dog, if you don’t get the formal Shortie ‘Meet & Greet’ bit right you are liable to experience the ‘Shortie Rage’.  This tends to include a lot of high pitched barking (once these guys start its deafening and they rant on at you for ages).  Then they start air-biting and worst scenario; their human will yelp and flap their arms around, which some big dogs have famously misunderstood as the start of a new fun game with an exciting stranger- Uh-oh!

So, here are my top Zola tips for keeping it happy with the Shorties!  (Great advice about calming signals to other doggies can be found in Turid Rugass‘ book ‘Calming Signals’ which has helped my human understand my doggie language.)

If you think they might have a hang-up about their size, it is best to just stay down low.

I find the best way to meet & greet a Shortie (offlead) is to actually saunter near, maybe pretend to sniff a few random things on the ground, then curve in on approach for a butt sniff.  Don’t stare too much at the oncoming Shortie…they might get paranoid!

Once there have been butt sniff greetings you’re in the clear and can continue on your way. 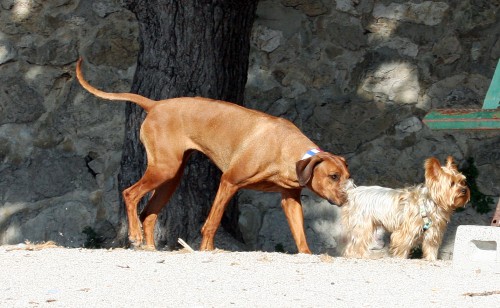 Sometimes they will approach you head on so it is better to stoop lower, lie down or sit and stoop for a greeting otherwise they may freak. 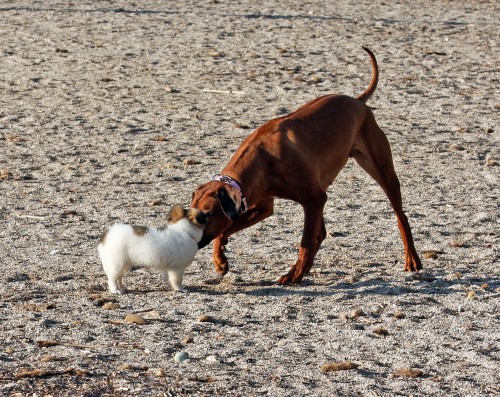 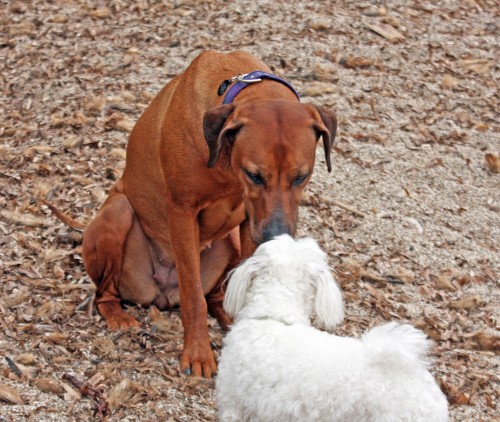 Sometimes us big dogs just have to ‘take the high ground’ and behave nicely since there are some gangster Shorties out there (most Shorties are very nice though!).  Shorties, like the Pug-thugs who possess the ultimate ‘Cute Power’ which totally blinds humans from noticing any of their naughty behaviours.  These guys can do no wrong because of their cuteness.  Pug-thugs have no problem going straight up to the noses of big dogs with the pure intention of having a pop at them simply because they are bigger!

Ringo Pug Thug showing his ‘”Cute Power’ when humans are about. Euwwwww!

“Good Day! I’m Ringo.  What a pleasure it is to make your acquaintance.  I’m sure you would like to give me a biscuit now.  Oh thank you, how kind.  Have a nice day!”: 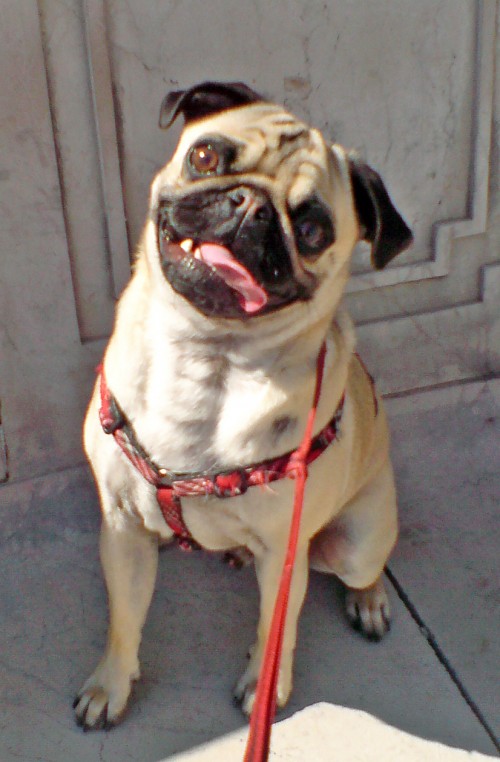 My human prefers me to be calm and relaxed with the Shorties.  She says I should respect them as big dogs that just happen to be in small bodies and be a polite, gentle girl when they are around.

My proper play times are always with doggies my own size. 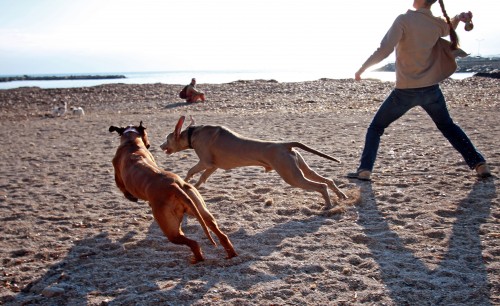 Hello - I'm Zola! I'm a Rhodesian Ridgeback Girl with my own Dog Blog! For the first three years of my life, I lived on the French Riviera. Now I have moved and am enjoying the lush green forests and country life in England. Welcome to a big dog's life!
View all posts by bigdogzola →
This entry was posted in Dog friends, Dog Fun, Home Life, Special Thoughts and tagged big dogs, small dogs. Bookmark the permalink.

9 Responses to Shorties & their ‘Cute Power’