“Though the ground keeps me rooted, my mind is in the heavens”

Between Monaco and Nice there is the medieval village of Eze.  Eze Village , bursting full of myths and legends, is always likened to an eagle’s nest perched on a narrow rocky peak.  Eze has been occupied by Phoenicians, Romans, Moors, Italians, Turks and Monaco over the centuries.  It’s known and loved for its dramatic location, scenary, history, art, restaurants and perfume makers Fragonard and Galimard .

(I’ll write a seperate post on my visits to Eze Village and Eze Bord de Mer (Eze by the sea) soon.)

(In the photo above you can see Cap Ferrat peninsular to the left corner.  Click here to see my post on St Jean Cap Ferrat walk)

From Eze Village there is a walk I really enjoy called Nietzsche’s walk or the ‘Philosopher’s walk to the sea’ down to Eze Bord de Mer.

Since I always love a fitness challenge, Vikki decided we would first go UP the walk to Eze Village and then come back down again!  Definitely a walk for the sporty doggies and humans, since it’s a leisurely 3hour feel-good round trip or sporty 2 hour stomp (430 metre height from sea level).

It was such a nice afternoon, our human friend Juliet, who also enjoys walking, came with us.

Enjoying a view point with Juliet: 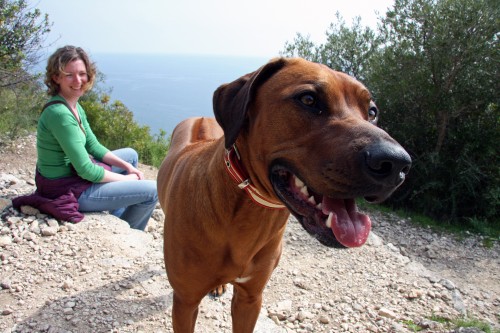 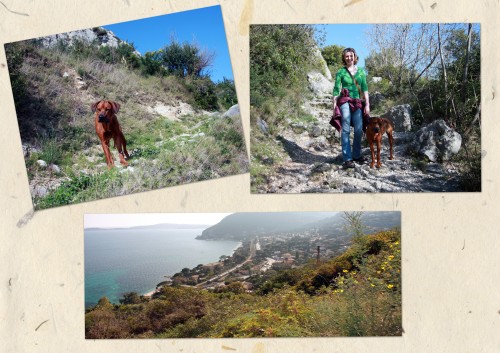 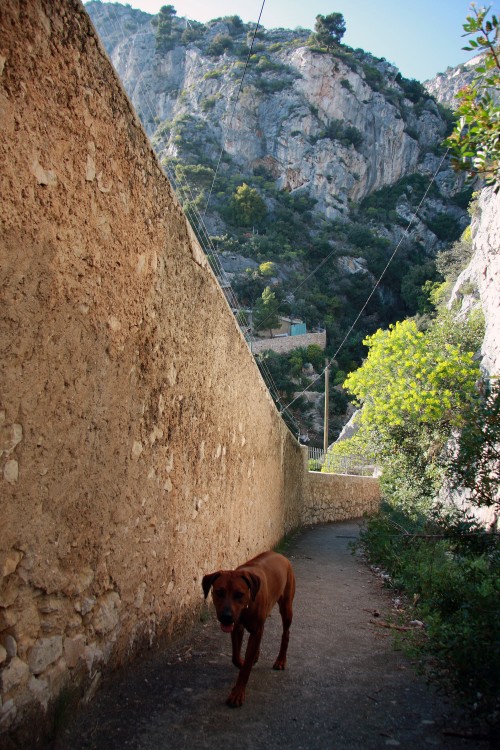 After about 10 mins of walking, this smooth path turned a corner and led us to the beginning of some very old Roman steps and a magical, topsy-turvy stony trail winding up and around disappearing as it turned another corner towards the sky.  The path changes so quickly it feels like you have fallen upon a secret trail in a kind of Alice in Wonderland and Narnia meet Lord of the Rings way!

As we got higher, Vikki and Juliet who normally chat a lot, were peaceful and smiley.  They were looking up to the sky and the fabulous views, enjoying the surroundings and fresh air, noticing the butterflies, flowers and bird noises.

Even I found myself quietly and calmly enjoying everything, staying close by and stopping with them at various points just to take in all the yummy fresh smells of nature :).  What a tranquil, happy walk!

You can’t help but look up all  to the sky for the first glimpse of Eze Village and the big birds of prey!

There is a little mystic magic in the air whenever you are on this special walk.  Vikki says its like a fairytale path zig-zagging its way up to a floating fortress village suspended in the sky.

I don’t really have that much choice other than to follow the path, but there are a few places and flat bits I have found for an extra sniff and explore:

My very own magic Ridgeback Rock behind me!

Up and up and up…

(In France, the yellow painted dash marks normally found on rocks at the side of the path guide our way.)

Spot the one below! 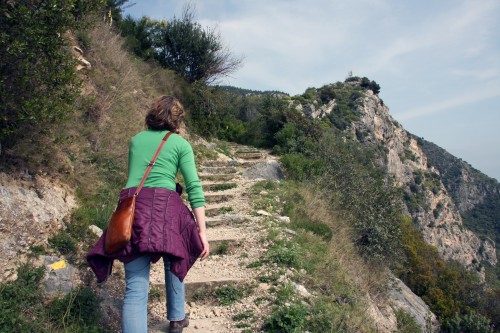 Once at the top we all enjoyed a nice drink of water and a little rest.

I got some extra special cold water too! 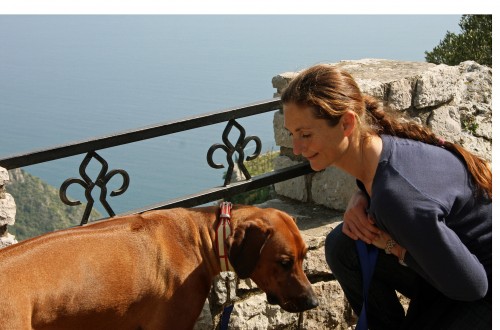 Satisfied and contented, it was time to head back down the walk.  Returning onto the walled path, back to reality and Eze beach for a refreshing paw paddle in the sea.

Vikki read that Nietzsche wrote of the Eze walk:

“I slept well, I laughed a lot and I found a marvellous vigour and patience”.

He also found the inspiration to write the third part of his famous “Thus Spoke Zarathustra” (which is all about a prophet coming down from his mountain retreat to mankind), much of which he composed in his head while hiking this trail.

The walk must have been very important to him since it even took his name: 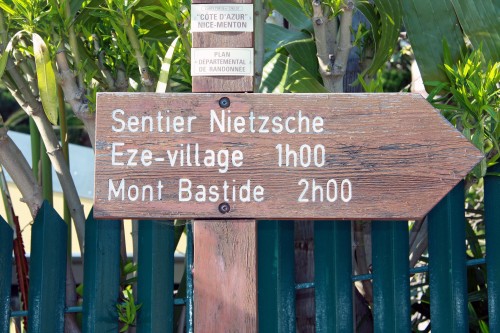 So on our next Eze walk, when the gravel path crunches below my paws and Vikki’s feet and when the going gets a little tough on the way up to Eze Village, we will think of Nietzsche’s words:

“You are treading your path to greatness. No one shall steal after you here…”

Hello - I'm Zola! I'm a Rhodesian Ridgeback Girl with my own Dog Blog! For the first three years of my life, I lived on the French Riviera. Now I have moved and am enjoying the lush green forests and country life in England. Welcome to a big dog's life!
View all posts by bigdogzola →
This entry was posted in Dog life in the South of France, Dog Walks and tagged dog walks, Eze walk, French Riviera, Nietzsche's walk. Bookmark the permalink.

7 Responses to A walk to Eze Village – Nietzsche’s walk