Watching the joggers go by

When I was younger, I enjoyed catching up with the joggers (mainly the  fast ones).  They would see me heading over:

It really used to concern Vikki when the joggers glared back at us (understandably) with grumpy faces, since they had to stop running and stand still before I realised they didn’t want me to circle them or play racing games!  Humpf!

Jogging is a very popular activity around here, so it was high priority for me to learn that joggers/ runners don’t want to play with us doggies and that I should let them get on with it and ignore them…blank them…like they are not even there!

So here’s how we completed ‘Mission Ignore Jogger’:

The ‘watch me’ and ‘leave’ commands I learnt at home and at the doggie school were put into extra practise on well known jogging routes.  Whenever a jogger was in sight, I had to sit far enough away that I would be successful on the task (on lead) and Vikki would say ‘watch me’ (that means look her in the eye).  When I looked at her I would hear the click (if clicker training) or ‘good girl’ and then I would be given some top notch yummy treats to munch on as the jogger ran by. 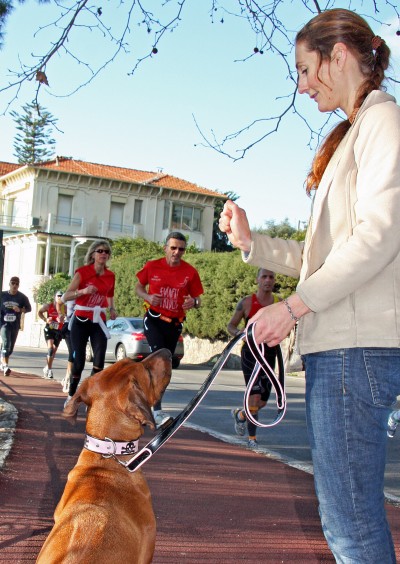 The yummies were ‘positive reinforcement’ for my calm sitting behaviour and attention to Vikki.  We did several sessions like this and then eventually I didn’t need to look at Vikki, instead I was asked to ‘leave‘ as I watched the joggers go by…more yummies.

It was not long before I could sit much closer and watch  joggers go by myself! 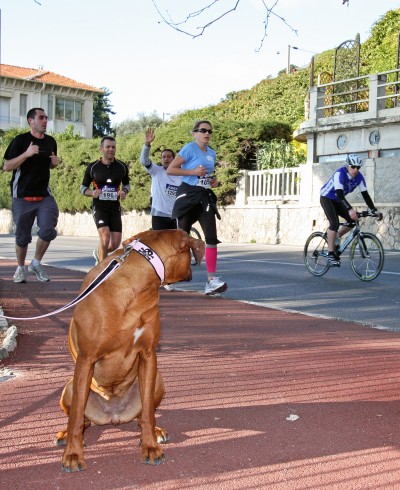 Once off lead, Vikki would ask me to ‘leave‘ as we were walking past joggers (already practised and knew ‘leave’ from other exercises).  I understood the connection between ‘leave’ and ‘joggers’ so I got my yummies!  Phew!

Nowadays, I don’t really notice joggers and just run past them.  They look very surprised and end up stopping anyway to ask Vikki what kind of dog I am (remember, there aren’t that many of us Ridgies out here) and then they ask if they can they say hello to me!

Every so often when I am ignoring a jogger, I get a surprise handful of yummies from Vikki..thats nice!

I do have and will always have chase instincts / prey drive  – hey I’m a true bold Ridgeback girl!  At least I have learnt that this does not extend to ‘joggers’, cyclists, humans and human-pups…so I’m a good girl.

Why did I ever think joggers were interesting to chase?….Not fast enough..Boring!

So why is it that some of us doggies get all excited about chasing..what do we get out of it?

There is much written about prey-drive and chasing instincts. Vikki has read lots of different books and thoughts on the subject with great interest.  It doesn’t really matter whether its chasing, the need to jump into water, searching and stalking, in fact any doggie urge that comes from our natural inherited instincts, selective breeding, predatory/ hunting behaviours can cause us to ‘get all excited’ and we can often forget what else is going on around us!

The answer lies in a powerful feel-good system in our doggie mind and body called ‘internal reinforcement’ which we feel when we are pursuing these activities we are genetically predisposed to.  For instance, dogs that chase are being internally reinforced with massive natural ‘happy high’  feelings at the same time. They don’t need to be ‘externally’ positively reinforced with a biscuit, click-treat or a kind word from their human, because the behaviour is hugely rewarding in itself.  We don’t even need to learn it – it’s that natural and it makes us feel great.  Through chasing, we enjoy the “high” from endorphins buzzing around the body to such an extent that we close down other senses to concentrate upon it (sometimes we don’t even hear anything anymore since the excitement and ‘high’ has filled up our head and ears!).

The problem is some doggie instincts aren’t suitable, appropriate or safe in our human’s world.  In fact they can be a hazard and liability, so it is a ‘must’ for doggies to understand how to keep a handle on them.  Understanding when it’s not cool to let that buzzy feeling take over when our human is saying no and asking us to ‘leave’ is super important….it might just keep us safe.

Weimaraner Othello wants Vikki to throw the toy for him to find and retrieve it, whereas I just want to chase him!

Understanding why us dogs chase is crucial; knowing that we take massive brain-chemical induced enjoyment from it; that we aren’t deliberately disobeying our human or deliberately not listening; or being stubborn and need some dominance! (yikes!)  We are just obeying a stronger natural internal urge. Without practise of impulse control training, we can’t actually help it since we are simply fulfilling the pre-programmed role deep inside our being that we were bred to be good at!

Once humans see chasing from the dog’s point of view, it becomes easier to understand, (forgive!), recognise and appreciate that training a dog not to chase is not like training a dog to sit. The desire to sit for a reward is more or less the same for every dog, but each dog’s urge to chase can be negligible, immense, or anywhere in between.

Vikki practises recall, happy to see Othello & I come back:

Vikki’s notes: Reward based obedience training improves relationships and opportunities for positive interactions which is definitely the best way to go when it comes to trying to control natural instincts like the chase instinct.   Its all about’ impulse control’ training starting at home quietly learning the ‘leave’ command and raising the criteria step by step in different places, settings and with different challenges using the most favourite treats to help concentration and motivation. If there is a situation when it’s too late to ask for ‘leave’ then a recall should always be a positive happy experience for a dog…even if it takes ages, the dog should receive a warm, joyful welcome back on return!

Hello - I'm Zola! I'm a Rhodesian Ridgeback Girl with my own Dog Blog! For the first three years of my life, I lived on the French Riviera. Now I have moved and am enjoying the lush green forests and country life in England. Welcome to a big dog's life!
View all posts by bigdogzola →
This entry was posted in Dog life in the South of France, My Training and tagged chase instincts in dogs, dogs & joggers, prey drive. Bookmark the permalink.

3 Responses to Watching the joggers go by