September marks the end of the summer holidays and the beginning of the beach season for us dogs in the South of France…Hurrah!

July and especially August are the ‘meltdown’ months on the French Riviera.

The temperature soars, lots of visitors arrive and not much seems to get done!  Many businesses and public administration offices are closed during this time.  To avoid the heat, most of us doggies tend go out for a walk far too early in the morning 😦 and then we find a cool, comfy snooze spot (preferably with a fan, breeze or airconditioning) to relax and await evening activities and entertainment!

I can tell the summer is nearly over though;  the full moon last week has brought a coolness back to the evenings;  I don’t have to get up so early to avoid the heat :);  there are fewer boats and yachts on the water and Vikki has started taking me to the beach.

During late September, the beaches are no longer raked and manicured every morning by the big tractors.  The beach bars and restaurants have closed taking with them the sunloungers and tables that filled up most of the beach.  The beach can breathe a big sigh of relief and return to its natural state with seaweed washing ashore to form the soft hills for me and my friends to jump around on and enjoy!

I had a beach reunion with two of my best beach friends – I hadn’t seen them for ages!

It wasn’t long before I saw Poodle Clio arrive and happy to see each other again, we played with a stick and took a dip in the sea together. 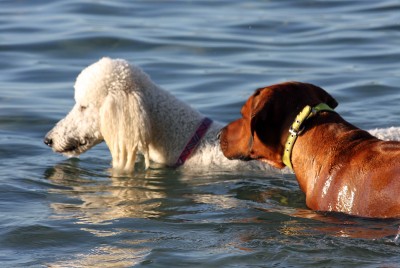 A short while after, Weimaraner Othello appeared almost from thin air..he wanted to surprise us!

Vikki thought I had stopped growing a while ago, but both Clio and Othello’s humans commented on how I am looking ‘all grown up’ and taller since last time we met in early July!  I did notice that Othello has always been taller than me….until now!

Hello - I'm Zola! I'm a Rhodesian Ridgeback Girl with my own Dog Blog! For the first three years of my life, I lived on the French Riviera. Now I have moved and am enjoying the lush green forests and country life in England. Welcome to a big dog's life!
View all posts by bigdogzola →
This entry was posted in Dog friends, Dog Fun, Dog life in the South of France, Rhodesian Ridgeback and tagged Beach, dog friends, dog walking, dogs playing, French Riviera. Bookmark the permalink.