this way for pet passport control

Since the year 2000 almost 500,000 of dogs and cats (and even a few ferrets!) have travelled on the Eurotunnel, so this year celebrates the 10th anniversary of the Eurotunnel “Pet Travel Scheme”.

Dogs & cats can travel together with their humans to the United Kingdom under the DEFRA rules (DEFRA is the UK department for Environment Food & Rural Affairs).

As a young dog living in France, I have to follow certain requirements in order to enter the United Kingdom so Vikki (my human) had to plan well  ahead. 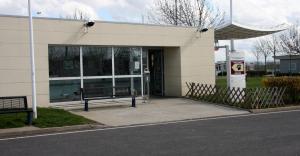 After successful blood test results have arrived from a laboratory there is a six month obligatory wait before travel (from the day the vet took the blood sample).

After this process it is very straightforward for future travel..for futher information click here.

When Vikki booked the Eurotunnel, she had to calculate the timing of the ‘pre-travel appointment’ with the vet.  During this vital appointment,  I would eat my special worming tablet against tapeworm (echinococcosis)  and have a dose of  Frontline against ticks.  The vet would then give me an official certificate of health document (fit to travel) to say this has been done stamped with the time of this appointment and a stamped passport.

It is important to note the time of the appointment officially stamped on the travel document from the vet,  since I must enter the United Kingdom within the timeframe of :‘no less than 24hours but no more than 48 hours’  of this appointment time.

Vikki planned it that we had a full day of exercise and activities so that by the time we set off for England I was nicely satisfied with my day and ready for ‘sleep-time’ (I didn’t have as many daytime naps so I was really looking forward to it!).  Roofbox on and back seats down with my comfy bed waiting for me I jumped in the car stretching out for my overnight journey to Calais.  ZZZZzzzzz…:)

When I woke up we were nearly there..how did that happen?

Sometimes people who are coming to Calais from destinations much further afield go to a vet nearer to or in Calais for this stamped document and spend the night there until the 24hours has elapsed just to keep life simpler.

There are lots of dog friendly places to stay in France – in fact it is rare for hotels not to allow dogs and if they do they generally have it stated when reserving a room.

Otherwise in France it is assumed dogs are allowed but it should always be mentioned when booking to find out what the doggie charge is.  Eurotunnel even have their own recommended list of local ‘pet friendly’ hotels to stay in..heres the link to have a look.

The Eurotunnel is the best choice for us since:

Do dogs get sea sick?

– the journey takes just 35 minutes come rain or shine..and you can have a snooze or picnic since you stay in your car.

– as mentioned before which is the clincher for Vikki – dogs and cats stay with their owners and their families in the car on board Eurotunnel Shuttles unlike being left alone in the car when on the sea ferry.

There is a dedicated control building on the Coquelles terminal, staffed by bi-lingual Eurotunnel employees who check microchips, vaccinations and paperwork and who, in the event of a problem, can call upon the assistance of a network of local vets. 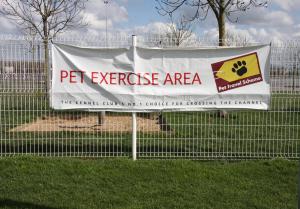 designated mooch about area before the trip

There is also a securely fenced area where we can have a toilet break, play and mooch about.

The Calais ‘pet exercise area’ is bigger than the Dover one,   but both do the job for the shorties (smaller dogs than me) to run around in.  At least I can pick up and leave some pee-mails and have a wander-sniff around myself.

Everyone at the Eurotunnel were really friendly to me and smiled a lot.

Once I got my ticket and finished in the ‘pet exercise area’ it was time to pass through the human passport and customs control and then to the waiting lanes ready to drive on to the train.

vehicle waiting lanes to get on the train

The quality of the service has meant that Eurotunnel has won the Kennel Club’s “Best cross-Channel Carrier” and the Winalot Dog Friendly Awards.

Apart from the “Pet Travel Scheme” Eurotunnel has already been chosen to transport thousands of live animals such as seals and dolphins because of the speed and convenience of its service.

Animals travelling within any European Union country need to be accompanied by a Pet Passport. For Ireland, Sweden, Malta and United Kingdom, further rules apply. When crossing the Finnish border animals must, in addition to the passport, also have proof of tapeworm (echinococcosis) treatment. All vets should have the relevant information and be able to prepare a pet for travel.

The EU Pet Passport can also be used when travelling between Europe and the following non-mainland European areas: Corsica, Sardinia and the Balearics.

It may also be used when travelling between EU and other countries with the same rabies status. Included are: Andorra, Iceland, Liechtenstein, Gibraltar, Monaco, Norway, San Marino, Switzerland and the Vatican City State.

Hello - I'm Zola! I'm a Rhodesian Ridgeback Girl with my own Dog Blog! For the first three years of my life, I lived on the French Riviera. Now I have moved and am enjoying the lush green forests and country life in England. Welcome to a big dog's life!
View all posts by bigdogzola →
This entry was posted in Dog Travel and tagged dog travel, Eurotunnel, pet passport, Rhodesian Ridgeback. Bookmark the permalink.